It’s been awhile since I’ve posted. 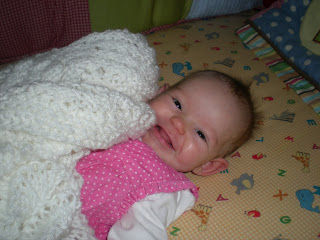 News around here is that Nora weighs more than 14 lbs and in the last week has started sleeping 7-8 hours at night in her crib.  Honestly, I’m a little bit sad about that – I love having her in with us.  But, we’re going to bed later these days and so I put her in her crib around 10 when she falls asleep so I can get more work done.  Since she doesn’t wake up before I go to bed, there she stays.  Chris bumped our nighttime temperature  up to 65 degrees (from 60), because we where afraid that she was getting cold and we’re keeping her all snuggley with the afghan Grandma White knit.  So she seems to be sleeping pretty well.  (PS, that picture is about a month old.) 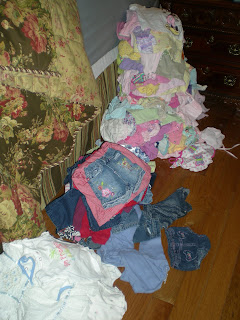 Other Nora news is that she is now fully loaded with 6-12 month clothes – and they’re girl clothes!  Someone on the Hudson Valley Parents form posted that she wanted to give some away and I was the first to respond, so last week I went to pick them up.  I had no idea that we’d be getting two HUGE trash bags full!  Not only are they incredibly cute and in great condition, but almost a quarter of them still had tags.  Chris and I decided that this was the mega score of baby clothes (and couldn’t help but wonder why anyone buys baby clothes). Here’s the massive sorted out piles for laundry (next to our unmade bed – sorry, mom).  There were enough clothes for four loads of laundry, and if we didn’t have an awesome front loader, probably would have been five.  I had a blast sorting them, although Chris probably got tired of hearing “Oh my gosh look at this one!  It is sooo cute!”  I can’t wait until she fits in them and we can flood the blog with pictures.

We’ve been talking about the future a lot lately.  One of our New Years resolutions is to save at least $7000 towards a down payment on a house.  Up until now, we had been putting all kinds of money into paying off student loans and trying to eliminate debt, but now we’re going to put some money aside to try to buy a house.  It’s too bad that we weren’t in a place to build savings last year, because that $8000 first time home buyer refund would be great.  It’s probably just as well, though because we aren’t really sure where we want to be next year, and jobs factor into that quite a bit.  I tried to convince Chris that we should sell all of our belongings and go live in a trailer in Wyoming.    I would be totally happy, gardening, canning, and watching Nora and Pip romp through the plains, but there wouldn’t be room for both his monitors. 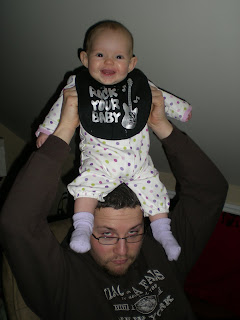 So, putting that possibility aside, a lot is up in the air.  I love my job at Bard and if I have to be working all day, I wouldn’t want to be anywhere else (I’m thankful every day to not be at Marist).  But, we are far away from my job and I basically live like a single parent 4.5 days a week.  Chris doesn’t see Nora at all on Monday, Tuesday, Thursday, and Friday, that’s not ideal in the least bit.  Luckily, they still have father-daughter day on Wednesdays, without that I don’t know what we would do.  And he’s so wonderful about giving me a break to sleep in on Saturdays.  As you can see, he has some unusual techniques for “Nora entertainment”, but she loves it.  As a matter of fact, he is much better at getting laughs out of her than I am.  Apparently, I’m not funny enough.

This has turned into quite the post and Nora and I still have to get ready for the day.  We’re off to a weekend Tiny Yoga class this afternoon, plus we need to clean and start packing for our trip to California.  Yep, I have to go out to California next week for work and she’s going with me.  She’s turning out to be quite the frequent flier, but more on that later.