It’s almost safe planting time in the northeast and Chris and I spent the weekend getting ready.

I have pretty big plans this spring, since I feel like this is a house that we’ll stay in for a few years. I ordered berries and rhubarb from our county extension office last month. Ten Strawberry plants, 5 raspberry, 2 blackberry, 2 blueberry and 2 rhubarb, so I spent last weekend trying to figure out where to plant them all. 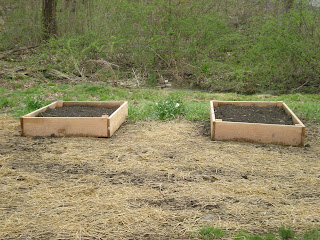 Everything except for the raspberries I’m going to put around the southern edge of our house. The raspberry bushes I still haven’t decided on.

Also, we built two 8’x4′ raised beds and filled them with top soil for herb gardening and maybe a few tomatoes and peppers. Unfortunately our yard is really rocky and doesn’t have a lot of good soil from all the construction, so the raised beds are pretty necessary. We’re going smaller on the major garden vegetables this year because I don’t know how up to it I’ll be by July. But, we joined a CSA again ; a farm in New Paltz that also sells eggs and free-range meats, so we’ll have plenty of fresh local vegetables all summer despite me not planning to grow any.

A week ago last Monday I had the day off and it was really nice out so I did a bunch of gardening then, too. I moved some bulb 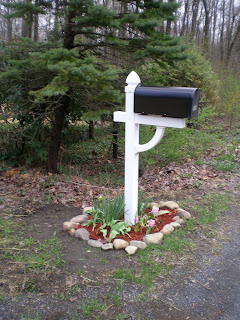 s which were in an odd spot in the yard to around the mailbox (hyacinth, tulips, and daffodils) and then put a rock border around it and some mulch. So far they look like they’re taking okay; the hyacinth started blooming yesterday. I think maybe Marc’s grandparents had a flower bed in that spot in the yard, because there were a lot of bulbs and a rosebush, which I also moved. Of course, I found some poison ivy, which never fails – every spring!

I ordered organic heirloom herb seeds from the Seed Saver’s Exchange in Iowa and they should be here soon so I can start planting in the beds. Chris is going to pick up the berries from the extension office on Thursday, so planting them will be this weekend’s project. I also want to do some flower/bush planting toward the end of May in the front of our house, but I’ll plan that later.