It’s been a big week for the Hinds family.

Yup, we’re a family again…meet Pip. Though he’s no Puck, Chris and I were happy to adopt a little red dog this week from Puerto Rico, of all places. He’s about a year old, is some sort of Pariah-type and is tiny by our standards, only 15-20 lbs, but will be good for when the baby comes along – pretty mellow and a bit timid. 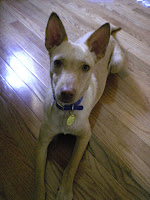 Chris picked him out and I named him after another orphan. (Can you name that book? Hint: it’s not Shakespeare this time.) Of course it only seems fitting that it’s a bit reminiscent of the word “pipsqueak”, but I swear that wasn’t what I was thinking.

He’s getting along well (not a single accident in the house!) and has been hanging out with Chris all day since Chris has had another week-long delay in schooling. He’ll be back on track Tuesday and in AM classes so he won’t lose his job, but has been enjoying a vacation in the meantime.

Other exciting news is that on Monday I was initiated into P.E.O., a philanthropic sorority dedicated to improving educational opportunities for women. P.E.O. has been around since 1869, has numerous scholarship and loan opportunities and also operates a college in Missouri. I’m thrilled to be part of such an amazing organization and to be “sisters” with a great group of women (including my step-mom and grandmother!). The women in my chapter are so welcoming and are going to make me enjoy living in New York even more, plus it’ll be nice to have them nearby after the baby comes.

We had a sonogram today, probably our last as long as things continue progressing normally – which is good, because it was a little tempting to know that if we just asked… Chris said he almost did, but then stopped because he thought I might hit him. 🙂 Anyway, the tech said everything looked great. We could see the four chambers of the heart, the separate parts of baby’s brain, and even the blood flowing through the umbilical cord. S/he is weighs 9 oz and is about 8 inches long. Once again, baby didn’t cooperate too well and was pretty much curled up into a ball, so we couldn’t get a great picture printed out, but it was still fun to see him or her moving around, which I’ve really started to feel this week.