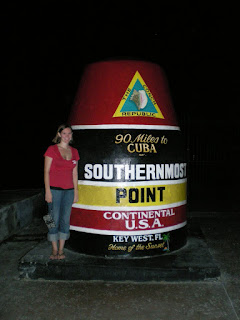 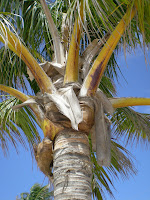 It’s been a busy week. I went with Danielle, our old roommate, to Key West for a long weekend Friday-Monday. It was a lot of fun, and nice to get some sunshine and relaxation. We met some cool people, laid out on the beach, watched a free Kenny Chesney concert, got a little sunburned, and made fun of a lot of Spring Break-ers.

We were asked at least 10 times a day if we were on spring break and lots of guys tried to hit on us, so I guess I don’t look that pregnant yet to people who don’t know — that or guys are just really unobservant, because I was wearing my ring…

I realized today that this week is a milestone – I was 18 weeks on Monday, which puts me in the first week of month five – meaning we’re more than half way there! It’s amazing how time flies; before we know it we’ll have a little baby… 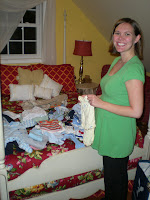 Which gave me a moment of panic this morning when I realized that we had nothing for baby – not a single thing off the long list. Luckily, the freak-out timing was perfect, because not 45 minutes later, my boss gave me two huge bags full of baby clothes. Most of the clothes are boy clothes, but there are plenty of gender-neutral onesies and little outfits for newborn and 0-3 months, so we at least have clothes. We may not have a crib, car seat, or stroller, but our baby won’t be naked!

Chris took a picture of me sorting through all of the clothes. Quite a few were already hand-me-downs when Kelly got them and will be going to Goodwill, but there’s a lot we’re going to keep.

If you’re interested, Chris and I signed up for a registry at Babies’R’Us.